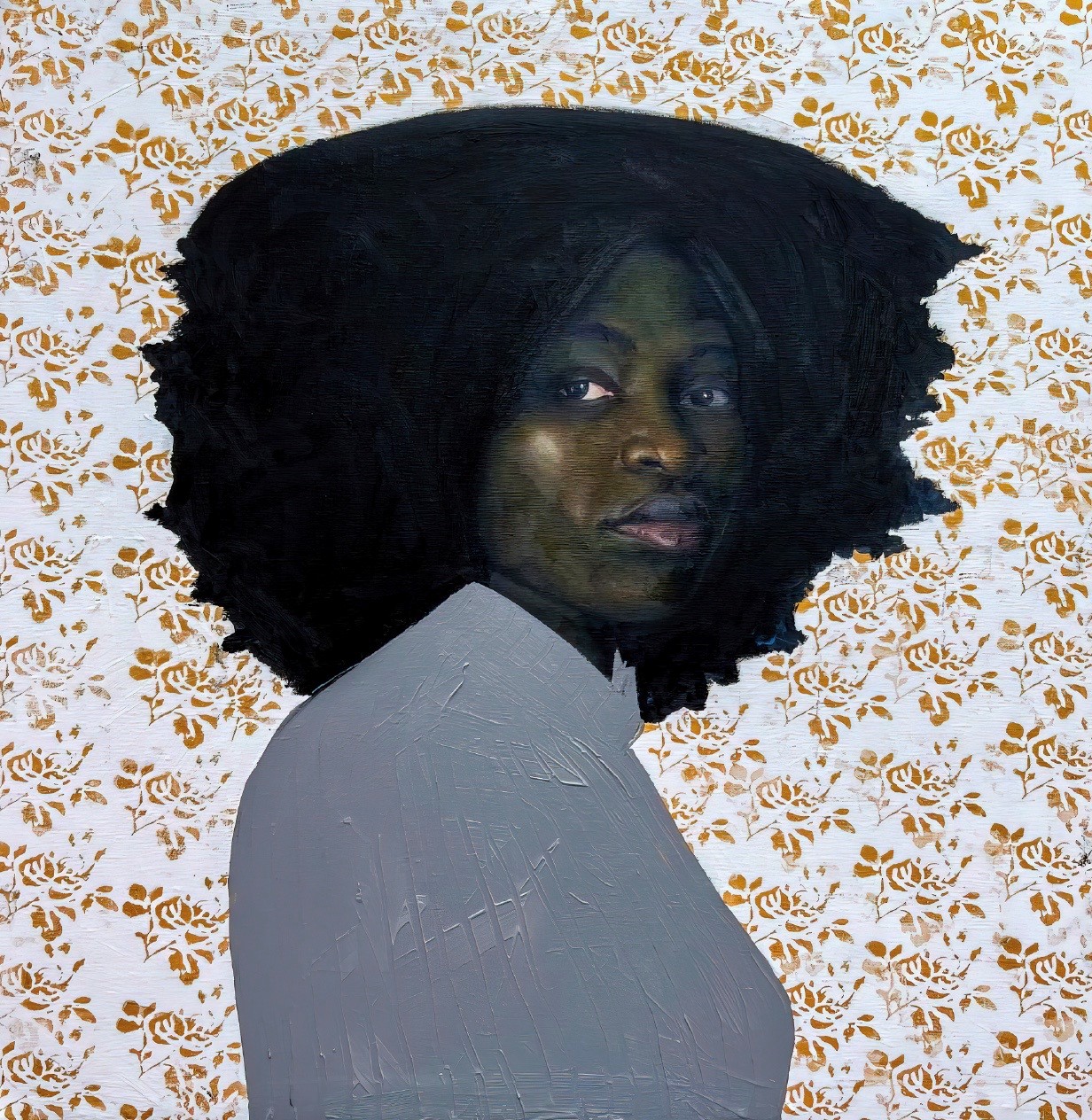 OOA gallery are pleased to announce the official opening of our debut London group show, Africa Rises in Fall.

For the past decade, London has led the international contemporary African art market, driving the irresistible rise in demand for artists hailing from across the African diaspora, and cementing its reputation as the pre-eminent modern and contemporary art capital.

Whilst from our corner of sunny Sitges in South Barcelona we have played a great role in fostering and championing the stellar careers of contemporary African art giants such as Aboudia and Oluwole Omofemi, and rising stars like Matthew Eguavoen, we are acutely aware of the need to expand our presence and global footprint to offer our artists the greatest platform to excel.

With this in mind, London not only affords us greater access to a multi-cultural, and international clientele, but also allows us to build on existing and future relationships with major art foundations, institutions, fairs and auction houses, all of which play a significant part in the evolution and strength of the contemporary African art market and ecosystem at large.

Coinciding with Frieze London and 1-54 art fair, Africa Rises in Fall, opens its doors from 9-16 October in the prestigious West London neighbourhood, Notting Hill, an area steeped in rich heritage, culture and beauty, and just a stone’s throw away from both Somerset House and Regent’s Park.

A nod to Notting Hill’s historic association with artists and its thriving and prominent post World War II African-Caribbean community which birthed the famous annual Notting Hill carnival, Africa Rises in Fall boasts an eclectic range of contemporary Artists spanning across East and West Africa, to North Africa and culminating as far as North America. Ranging from masterly figurative portraiture, to abstract expressionism, our exhibiting artists explore a full spectrum of medium, movement, narratives and issues, that both incite spirited debate and contemplation, as well as excite and evoke the senses.

Whilst the summer sun sets, and the autumn leaves begin to brown and fall, the art of Africa and her diaspora continues to rise, and soar, unperturbed by the change in seasons.

One of the most exciting contemporary artists hailing from Cameroon, Boris returns to London, in the wake of a strong showing recently in the capital, and ahead of his upcoming duo-exhibition in Barcelona.

Anjel’s work speaks to a modern cultural phenomenon which was conceived in Congo, but has since taken root across the global African diaspora; sapeurism or la sape. Boris’ muses not only embraces style and fashion as a means of enjoying the act of dressing well, but for them it is a lifestyle rooted in a philosophy and principles that all must adhere to. Boris, masterfully stamps and weaves indigenous African motifs, such as the adinkra symbols of the Akan people of West Africa, with high fashion labels, to communicate the socio-economic standing of his muses, their association to European wealth and prestige, but also that they are still on par with their ancient African beliefs and customs, and that both can co-exist in harmony.

2022 has been a breakout year for the rising Nigerian artist, with sold out shows in Barcelona, Paris, and New York, in addition to a strong reception in Hong Kong, London and Lagos thus far.

Matthew’s work is a strong visual social commentary on the socio-economic and political issues faced by the ordinary Nigerian and by extension the wider African citizen. He explores the impact of slavery on Africa and its diaspora, the extinction of traditional values, and the growing sensation and importation of religion, western morals and culture, in addition to the flight of Africans abandoning the continent for relative greener pastures in western countries

2022 has been a stand out year for the California native, and soft life advocate. Off the back of a sold out debut booth at Art Miami Beach, and selling out her duo show in New York ahead of its opening, Megan Gabrielle Harris is fast becoming one of the most in demand contemporary African-American artists with a rapidly growing waiting list of esteemed international collectors and art patrons.

Megan is a multi-disciplinary artist specialising in afro-surrealism and escapism. Based in California where she lives and works, and of Nigerian ancestry, her work is influenced and inspired by travel, surreal landscapes, and nature. Her sublime portraits typically feature women of colour depicted as powerful, regal, and divine and often painted against a rich, vibrant backdrop.

Onyis Martin’s work explores a spectrum of social issues ubiquitous to but not limited to Nairobi and many major urbans centres across the African continent, and indeed the world. Universal themes such as human rights, migration, political corruption, social and environmental decay, hyper consumerism and capitalism are unpacked through subtle references in fragments of newspapers and posters plastered on walls that speak to both the physical and mental barriers that impede humanity’s progress as a society.

Even more poignant are the traces of images of innocent children plastered on these urban walls, that challenge and confront the viewer in a judgemental fashion, a stark reminder of the future generations that will bear the costs of today’s social ills and exploitation.

Kenya born, France based artist, Evans Mbugua’s unique work is a powerful display of the reverence he holds for his muses. His choice to work on perspex and glass as his base canvas, creates an incredible illumination effect, which keeps the light on his muses, figuratively and metaphorically allowing them to shine, and be bright.

His bold choices of colours, hot pinks, and lime greens, are a deliberate means of showcasing the confidence, energy, and vibrancy of his subjects; their personalities, character, as well as who they are, and where they are from. Cool and flamboyant in their pose and posture, with their signature sunglasses, Evans strives to showcase the best of the everyday African he captures in his work, highlighting the star quality they each have in them to themselves and to the world.

A self taught contemporary artist with old master sensibilities, Oliver’s work speaks to a classical style of practice informed by early renaissance art pioneers, such as Michelangelo, fused almost seamlessly with a modern interpretation and touch through his depiction of black subjects.

Intrigued by the intricacies of the human figure as a unique work of nature, Oliver draws inspiration from the human form to depict pieces that express his views on issues he believes are neglected and overlooked in society.

Leading the charge of contemporary African artists on the rise, the young master returns to London, after a stellar year of sold out shows in Barcelona and New York respectively, strong secondary market auction results, and a historic commissioned painting of the late Queen Elizabeth II.

Omofemi’s preferred muses; black women, are depicted with dark, midnight hue skin, etched with deep tribal marks, and are crowned with engulfing halo-esque afros, reminiscent of past martyrs of the black power movement that swept the global African diaspora.

The artist’s overarching mission is to showcase afrocentric pride, which he maintains can only truly be championed through how black women view themselves and in turn are viewed by others.

For Omofemi, true liberty and emancipation for Africa and black people at large, can only be achieved once, black women are free to be their true selves and celebrated as they are.

Daniel Onguene’s bold, harsh portraits are an unapologetic depiction and reference to what the artist’s views as the dire plight of the socio economic conditions of his native Cameroon. Chaotic at best, and apocalyptic at its worse, the dreary greys and the moody and muted palette of his pieces’ backgrounds speaks directly to a bleak situation of urban decay and languish, which has been brought about by economic mismanagement, corruption, and lack of empathy for the working people, resulting in the informal sector or black economy becoming the main epicentre of commerce and trade.

And yet, in spite of this, the most obvious point in Onguene’s work is that his subjects are still managing, and in some cases possibly even thriving, in these circumstances. The welcome pop of warm, vibrants colours, and in some portraits, the smiles of his subjects, is indicative of an optimism, courage and hope that offers a promising counter narrative to the current state of turmoil and decline.

Following strong showings in Paris and Barcelona this year, the young socially aware Afro-zoomer from Cameroon continues his tour of Europe to debut his striking portraits in London.

Through his work, Moustapha explores and conceptualises his very own idealised and idyllic contemporary world, reminiscent of the golden age of the garden of eden before the fall of man. His portraits form artistic manifestations of his personal values and consciousness are informed by his progressive philosophy of humanism, which is underpinned by a calling for society to lead ethical lives, inspired by his tenets of love, joy, peace, cooperation and happiness.

REWA’s work speaks to a duality and multiculturalism that is both informed by European ideals and conventions, but also celebrates her West African heritage. The artist, like her muses, are a hybrid of indigenous beliefs and practices, specifically of the Igbo people of South-Eastern Nigerian, fused with Western sensibilities and style, informed by the artist’s upbringing between the UK and Nigeria.

This cultural melting pot has come to be described as ‘Afro-politans’, or ‘Afropeans’, and speaks to a growing and increasingly significant section of the African diaspora, whose identities are firmly rooted to Africa, but have clear cultural connections and ties to North America and Europe.

An archetypal Afro-politan and bon vivant, Turay’s imposing abstract expressionist paintings belie narratives referenced by his international upbringing and experiences between Morocco, Ivory Coast and the United States, and represent his effort to distil the essence of the contemporary human experience in our transnational, post-colonial, global society.

Turay’s practice transcends racial, geographic and socio-political notions, whilst still rooted in his identity and heritage through the utility of cultural motifs, chiefly ancestral masks and spiritual symbols.

About Unit 1 Gallery | Workshop and the Workshop Foundation:

Unit 1 Gallery | Workshop is an exhibition and residency space in London and unique in its approach to bringing artists and their practices to the public. They support a diverse range of emerging and mid-career contemporary artists by providing them with space and time to develop their practice, network within our growing community, be mentored by team members and crucially be introduced to their expansive network of collectors, art educators, professionals and visitors.

Through their residency programmes and exhibitions, they give artists, curators and theorists a platform to present work and share ideas as well as creating an environment for freethinking and exchange.

They have now organised more than 40 exhibitions with over 120 artists and curators, with 10 exhibitions and 25 artists in residence a year, drawing in international audiences and participants, as well as being a local landmark in the community of Kensington and Chelsea and its surrounds.

Unit 1 Gallery | Workshop was founded in 2015 by artist Stacie McCormick in a former builder’s merchant.

Fair Art Fair, a new app-based digital platform that facilitates relationships between everyone interested in Art in a confident transparent environment. Whoever you Art you will find a place to explore and discover, buy and sell, organise and document, communicate and be supported. Download the app here.